Although the Club’s activities on the water are mainly concerned with cruising we also run a very popular and successful Autumn racing series and Gala. These races attract not only boats from the Club but also from other clubs on the river and cater for both cruisers and gaffers.  The racing is friendly but competitive and a number of trophies are awarded to the winners. The post-racing BBQs and refreshments are a popular part of the Gala.

Autumn Series 2020
Thankfully the Club was able to run the Burton Series of cruiser races open to other Clubs on the river and MCC’s own Autumn Race Series also for cruisers.  There was a very mixed bag of weather for the 5 race series from some good wind and fine sunny days  for Races 1, 2  and 5 and some horrendously strong gusty winds and rain for races 3 and 4.  Some of the courses threw up some different opinions on how the courses should be followed but after some discussion all was settled amicably.  It was good to see some thirteen boats participate from Medway Yacht Club and MCC.  The winner from MYC  was Irene helmed by Steve Treadwell, well done Steve. Unfortunately we were unable to hold a presentation of the awards at this time, once restrictions ease it is hoped to do so.

Courses were set as usual by our expert on setting courses George Bonny to whom we are most grateful and of course his fellow line party members for doing a good job. Thanks also to Matt Love the MCC Sailing Secretary for organising the series.

Adrian Totton in Gothik just pipped Tim Deacon in Blueshank for the Club’s Autumn Series, well done to them 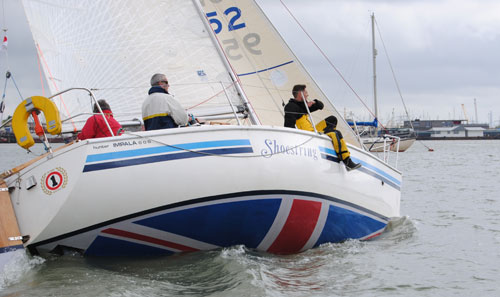